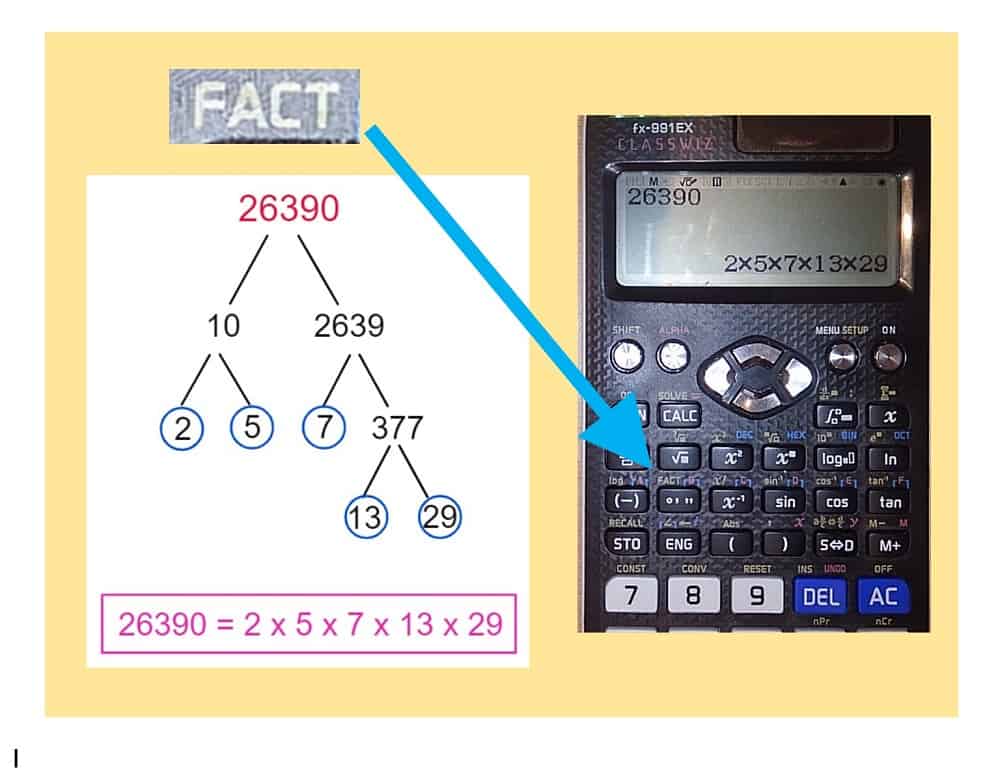 Expressing a positive integer (whole number) as the product of prime factors is a bit like dismantling a machine to see what it’s made of. Let’s try it with 26390. Drawing a Prime Factor Tree will take a while – but fortunately the calculator can do the hard work for us! Type in 26390, press = , then look for the FACT button – on my Casio fx you press shift first to get the button’s second function. Voilà: 26390 = 2x5x7x13x29.

AT GCSE: you are still required to “show your working” by drawing the prime factor tree, but it doesn’t hurt to use the calculator to check your answer.

THE FUNDAMENTAL THEOREM OF ARITHMETIC: This grandly named result says that it doesn’t matter in which order you split an integer apart, you will always get the same answer. In the case of our example 26390, many students would start by halving it: 26390 = 2×13195, but I think a better idea is to note that it ends with a zero, so 26390 = 10 x 2693 – this approach makes the numbers smaller more quickly. It’s difficult to see what goes into 2639. Two doesn’t, neither does 3 or 5, so let’s try 7: yes, it works! And so on until you are left with just primes.

WHAT’S THE POINT?: Expressing numbers as the product of their prime factors is the easiest way to find the LCM (Lowest Common Multiple) of two or more numbers.

You’d also need the LCM to answer this question:

Paula can run a lap of a running track in 15 minutes. Mohammed can run a lap in 24 minutes. If they start together at the same time, after how many minutes will they next be back at the starting line together?? The answer is of course the LCM of 15 and 24.

AT UNIVERSITY LEVEL (read on if you dare!): the Fundamental Theorem isn’t at all obvious and I’m still impressed by this result every time I see it. Proving it is very tough, but I can give you a flavour of how it works here, using proof by contradiction: